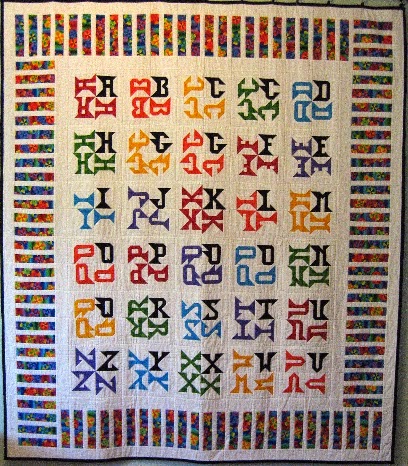 Pumphouse is a serif alphabet with large exaggerated triangular serifs.

The result of this exaggeration is an alphabet that is flamboyant, dramatic and theatrical. So I decided to name it after the Pumphouse Theatre in Calgary.


The letters of Pumphouse remind me of ham actors or comic book heroes. I see them wearing outlandish costumes with enormous capes fluttering in the breeze and wings on their sandals and hats. Like all ham actors these letters are constantly trying to upstage each other. In spite of all their extravagance, or maybe because of it,  I enjoy the show.

My plan is to publish the alphabet in 5 posts, 6 letters at a time.

The letters are shown on an 1/8" grid and have a finished height of 3".

The quilt requires 30 letters. So 4 letters have the option of an extra serif.

I thought it would be fun to make 4 of each letter and then assemble them as a pinwheel.