What You Can Learn From 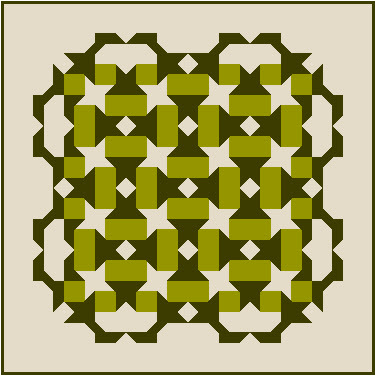 This quilt design was not made using Disappearing Nine Patch blocks; but it was inspired by them.

You probably already know what a Disappearing Nine Patch block is. But I'll tell you again any way.

When you think about it, what's really happening is a new block design is being made from a quarter of a Nine Patch block.

What if this were done with other blocks?

There are a large number of blocks that, like a Nine Patch block, are designed on a 3x3 grid. A few of these are shown below. What if I make new blocks from each of these. I'll take a quarter of each block and play with it to get a hint of what sort of designs are possible.


These are very easy blocks to design. I think I'll call them Quarter of Nine blocks because of where they come from.

The last time I looked, EQ6 listed 57 blocks that were on a Nine Patch grid. There are, no doubt, many more. You might want to play with some of them and see what kind of Quarter of Nine blocks you can discover.