Most quilters know nothing about proper letter design. Why would they? They are quilters not typographers.

This holds true for most quilt designers as well. Unfortunately, the result of this is that there is very little well-designed pieced lettering available to quilters.

The example below is made using letters from a patchwork alphabet that I found in one quilt book. The letters are made using squares, half-square triangles and quarter-square triangles. In their favor is the fact that they are simple to construct.

However, the A and P look smaller than the E and L, even though they are the same width and height. The M and X are obviously much wider than the other letters. And the X is much heavier than everything else. This alphabet is visually inconsistent; the letters don't look like they all belong to the same alphabet.

When I saw this alphabet, I couldn't help myself; I had to redesign it. I had to see if I couldn't do something to make the letters more consistent.

I need your help. Go through my version and point out anything that looks odd or out of place to you. You might play with the letters and try them in various combinations to see how well they work together. I'm hoping you'll see things I missed.

I'll start with letters and numbers that can be made using only squares. All letters are 6 squares high. Most letters are 3 squares wide.

There are two I's for a reason. 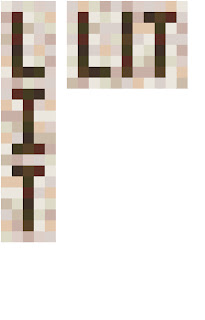 This alphabet is designed to be used both horizontally and vertically.

When they are all the same width, vertical letters are consistent and so look better.

When they are used horizontally the narrow I keeps the letters from spreading out too much.

Next come the letters that can be made using squares and half squares. 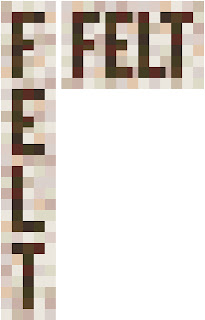 The half squares are used to center the cross bars on the E, F and H. They are also used to make the narrow versions of the E, F and L.

The narrow E, F and L are meant to be used horizontally.

The wider E and F are meant to be used vertically.

Notice also that the horizontal L and T overlap. This is done to keep the T from being so far to the right that it feels like it is no longer part of the word.