Today I'm going to continue on with the Patchwork alphabet I started showing you Saturday. 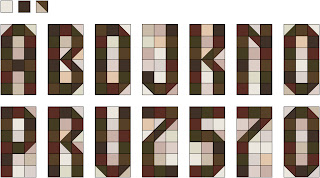 These letters and numbers are made using squares, half squares, and half-square triangles. 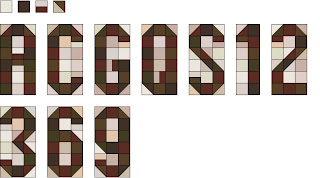 The half-square triangles are used 2 ways in these letters.

First, they are used to indicate roundness in letters such as P, C and O.

Second, they are used to make diagonal lines in letters such as N, K and Z.

In letters such as S, where there are long diagonal lines, care must be taken to see that the diagonal seams match.

Of all these letters, my least favorite is the Z. It works; it's readable; and it's compatible with the other letters. But it isn't conventional; it's not what I expect a Z to look like. Still, I can't think of a better way to do it, given the patchwork constraints. Perhaps you can.