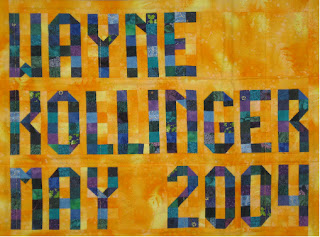 I don't know if you've noticed but design, not just quilt design but all design, has a split personality. Some times it's art and sometimes it's engineering.

In the first 3 posts I've dealt with how my Patchwork alphabet looks. Is it consistent? Is it attractive? Is it readable? That's the art side of design.

In this post I deal with the engineering side of design. How am I going to build it? Or rather, how should I sew it?

Once the letters were designed, I needed to decide the order of sewing. This is not as obvious as it may first seem.

What if I divide each letter into 6 rows of 3 squares each? 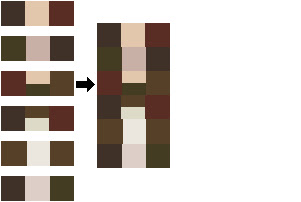 There is always a chance that the vertical seams won't line up perfectly. When they don't, the letter looks misshapen and less than attractive.

What if I divide each letter into 3 columns of 6 squares each?

The vertical seams now line up. The horizontal seams don't always match perfectly. But I don't care because it doesn't affect the appearance of the letters.

Wait a minute; that's not always true. Take the G for example.

The cross bar on the G could end up misaligned using the 3 column method.

What if I try a hybrid? 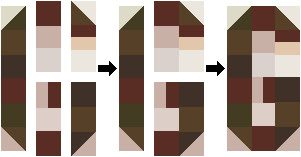 This works. The obvious conclusion is that each letter must be considered separately to see what order of piecing works best for it.


I started by saying that design is sometimes art and sometimes engineering. I shouldn't have said that. The words design, art and engineering scare some people. I should have said that playing can be fanciful and it can be practical but it's always fun. It means the same thing, but it's friendlier somehow.

To see examples of other lettering I've done go to My Posts by Subject in the sidebar on the right and click on Lettering.