Look For The Hidden Shapes 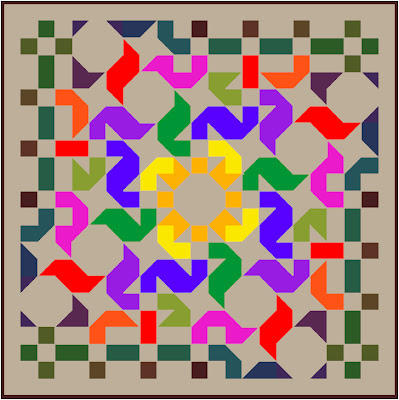 Too often we look at a familiar block and take it at face value. We don't look for its hidden depths. Which is too bad. Because there is more to most blocks than what you see at first glance. 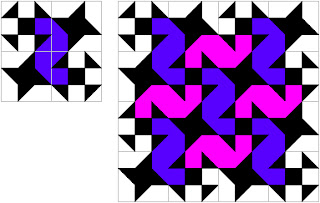 Shoo Fly and Friendship Star are 2 simple blocks that we are all familiar with. 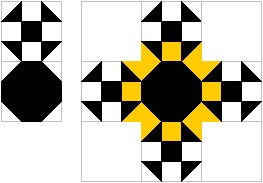 We can do the same thing with Shoo Fly and Snowball. This time we'll include a plain square as well.

Again we'll look for shapes that form in the background and color these so that they stand out. 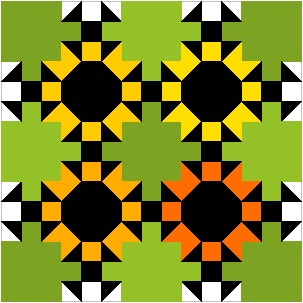 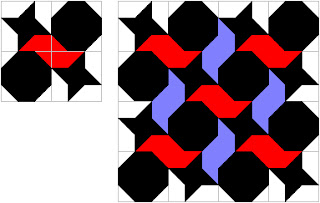 We are looking at the background shapes in each block and trying to see what kind of design we can create by joining them together. 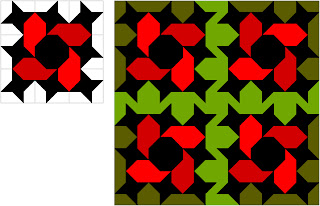 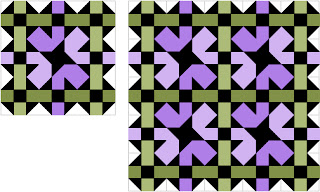 What if we surround a Friendship Star block with Shoo Fly blocks?

This time the Friendship Star remains as an important part of the design but the Shoo Fly blocks disappear.

Go back to the quilt design at the begining of this post and see if you can find the Shoo Fly, Friendship Star, Nine Patch and Snowball blocks in it. Notice the shapes that are created by coloring the negative spaces between these blocks.

We normally ignore the backgound in blocks. But there are shapes hidden in the background; negative shapes that we can use to create interesting and surprising designs. When those negative shapes are highlighted they become the foreground and familiar blocks take on a whole new look.