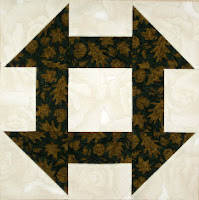 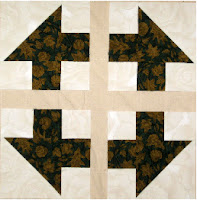 
You would have 4 small units to play with. I prefer to call them Quarter of Nine blocks since the original Churn Dash block was made by sewing 9 squares together and each of the new blocks is a quarter of those 9 squares.

There are any number of ways you could sew the Quarter of Nine blocks back together to make larger blocks. 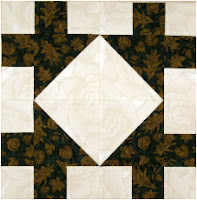 You could turn the Churn Dash block inside out and make this block. 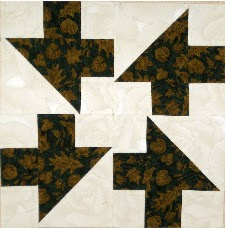 Or you could systematically rotate the Quarter of Nine blocks to make this block.

The square in the center is not quite square. Not because my sewing is so lousy that I can't get my points to match, but because when you re-sew the pieces back together you loose some fabric to the new seams. 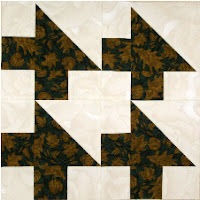 I find this interesting. When you line up all the units in the same direction, you get a kind of arrow in the center of the new block. 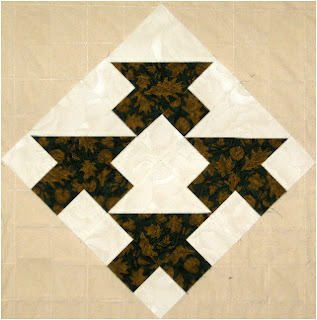 However, I find it even more interesting when you put the block on point. 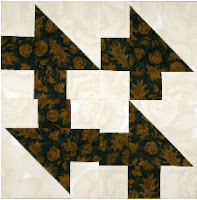 This time 3 of the Quarter of Nine blocks are facing one direction and the other one is facing the other way. 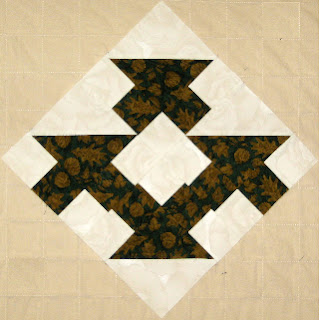 When this block is placed on point it makes a kind of basket. 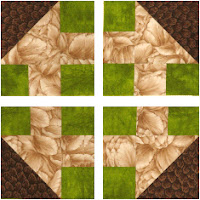 There is more than one way to color a Churn Dash block. 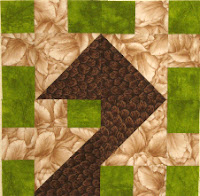 This curious looking block is assembled from the four Quarter of Nine blocks above.

I like funny looking blocks, they sometimes make the most interesting quilts. 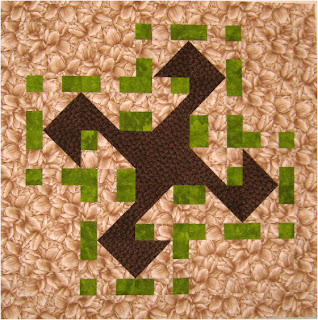 Four of the above block offset around a dark brown square make this table topper. It needs a border to make it complete, but you get the idea.


The Nine Patch block and the Shoo Fly block that we quartered in previous posts had plain squares on their sides. The Churn Dash block has a half square on its sides, but that did not create a problem when the Quarter of Nine blocks were sewn back together.

But what if the side squares were half-square triangles, would that create a problem?

We'll try cutting up a Friendship Star next and find out.