You Can Design Wonky 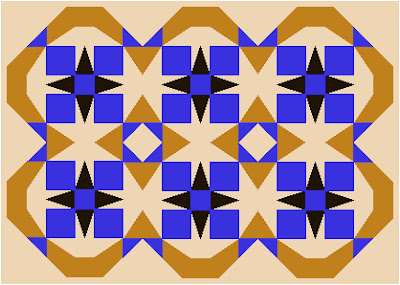 In parts 1 and 2 you saw traditional blocks become wonky blocks when the grids they were designed on were changed.  You'll see the same thing happen today, and then one step further.

This block is Summer Winds. As you can see it is designed on a very regular grid.

What if The grid is changed so that it is narrow on the outsides and wide in the middle?

What if the grid is changed so that it is wide on the outsides and narrow in the middle?

So far nothing has been tried that wasn't tried yesterday using Corn And Beans.

What if the grid is changed so that it is narrowest in the middle, but then the widest part is placed next to the middle instead of on the outside?

Now, instead of being 123 or 321, the progression is 231. This version has the center star of the previous version and the large roundish brown diamond of the one before that.

What if the colors on the latest block are changed slightly?

Now there is a kind of intermittent circle around the edge of the block. 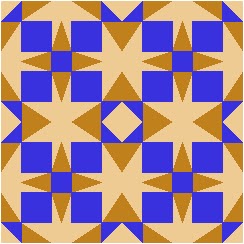 When this block is repeated, the circles join up on the perimeter, but disappear inside where they are replaced by additional stars.

I think this is a nice bit of magic. 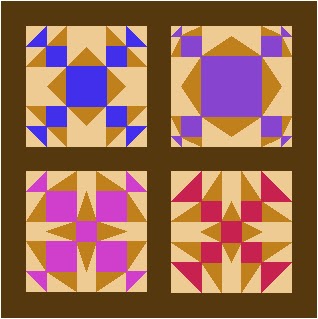 It seems to me that the blocks created by changing the grid on Summer Winds are both different enough and at the same time similar enough that they could be used quite successfully in a sampler quilt.