Every year my wife Linda and I put quilts into the Heritage Park Quilt Festival here in Calgary. The year this quilt was part of the festival I had two other alphabet quilts exhibited as well.

We met a friend in the park who said she'd seen my quilts and they were wonderful. Then she said that someone else did an alphabet quilt and it just didn't flow.

Linda and I had been all over the park and the only alphabet quilts we had seen were mine. It was this quilt she was referring to.

And she was right. It doesn't flow. Every letter is from a different alphabet that I'd designed. They don't look like they belong together because, in point of fact, they don't. 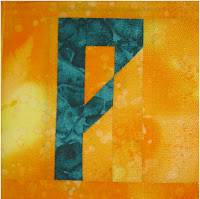 This F is from my alphabet Tuscarora.

It is a block alphabet with square corners. Instead of a horizontal crossbar, it has a diagonal one and the diagonal is repeated in the ends of many of the letters. 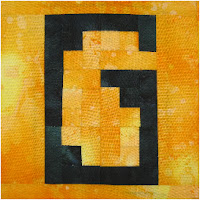 This G is from an unnamed alphabet. The G is the only letter I've ever sewn from this alphabet.

Each letter is built up from six small log cabin blocks. It was an interesting experiment but I don't find the results all that attractive.

I like to think that my sewing has improved a lot since I made this. 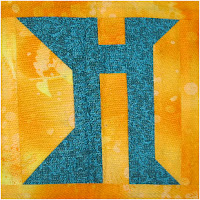 This H is from my alphabet Pumphouse.

It is not something that you would use for any serious purpose but it works just fine on a child's quilt. 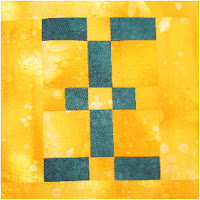 This I is from my alphabet Heritage.

The idea for this alphabet is one that has occured to many people over the years. My original inspiration for this was a cross stitch alphabet.

If you go to 9 September 2011, you'll find the complete alphabet. 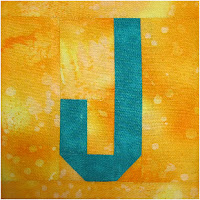 This J is from my alphabet Connaught.

Connaught is a simple alphabet that I teach in my pieced lettering classes.

If you go to 11 January 2010, you'll find another letter from this alphabet.