The Connaught alphabet is constructed on a 3 x 6 grid.  The letter H is straightforward and looks like this.

What if I add a shadow that is one grid unit wide?

What if the shadow falls on a 45 degree angle?

How am I going to piece this letter?

What if I divide it vertically into 4 strip units?

Like the letter H itself, this piecing is simple and straightforward. 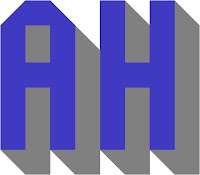 A nice feature of this alphabet is that letter spacing is not a problem. The letters butt against each other and the shadows provide the spacing.