I wondered, what if I try making a pieced alphabet that mimics handwriting?  My Pump House Script alphabet was the result. 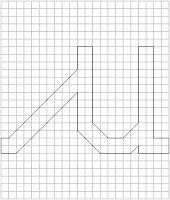 Because all the letters need to join, they all have to start and stop at the same spot.  I decided that all letters would meet on the base line. I also decided to use a long 45 degree stroke at the beginning of each letter.


I'm going to try piecing u. 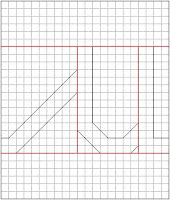 What if I do the obvious and divide the block into three  sections using two horizontal lines?

What if I divide the center section into three sections using vertical lines? 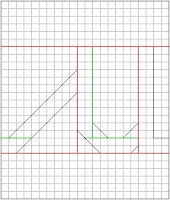 The next piecing seam lines I'll show in green.

All the little triangles in this are not as hard to piece as you might first think. I make them using the connector corner method - I never cut triangular pieces, I cut square pieces, then sew them on the diagonal and cut off the excess.

When words are assembled from this alphabet they are quite long because the letters are spaced far apart.  However, this alphabet is very readable, has lots of character, and a nice rhythm.