On 30 March 2010, Judy commented that these blocks might be useful for making borders but that the corners might present a problem.  Let's find out. 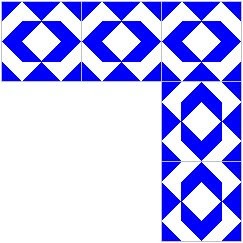 What if I ignore the problem?

This will work using any of the four blocks as  borders. But the pattern doesn't turn the corner; it stops and then starts again. This solution isn't elegant or clever; but it does work, sort of. 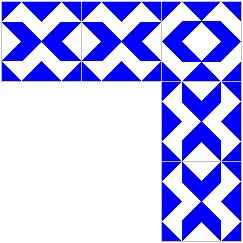 What if I use one of the other 3 blocks in the corner?

There are four different blocks that can be used to make borders; so there are 12 different border/corner possibilities. The results aren't much different from the first attempt, with one exception. 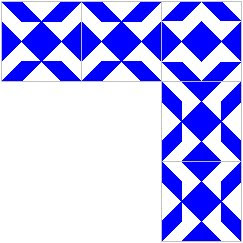 This is the exception. The first block (Empire Star) is in the corner and the third block along the sides. I like how this looks. The Empire Star block matches horizontally. However, vertically there is only a partial match.

I would prefer a block that matched both ways. 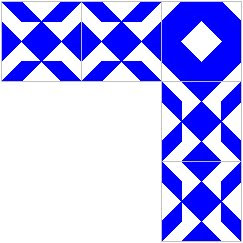 What if I try using an entirely new block for the corner?

This turns the corner and adds emphasis to the corner.  Which is fine if that's what you want to do.

I would prefer the corner to be a continuation of the rest of the border. 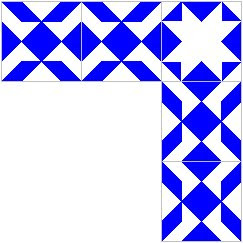 What if I reduce the amount of blue in the corner by overlaying it with a white star?

This is better but the white star still places more emphasis on the corner than I want. 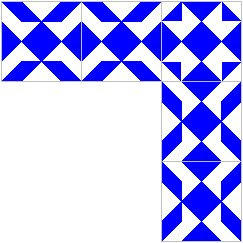 What if I put a blue diamond in the center of the star?

Finally the blue and the white are evenly balanced. The corner is part of the border and doesn't interrupt it.

This new corner block works equally well when any one of the other 3 original blocks are used for the border.


For more ideas for playing with an Empire Star block go to My Posts by Subject in the sidebar on the right and click on Empire Star.