What if I make a Card Trick block that has 3 "cards" the same and one different?

What if I take 4 of the blocks and rotate them, then combine them?

Not much to look at yet, but then I've just started. There are lots of things I can try.

What If I add a bit more magenta?

This is starting to look like something, but it needs more contrast to give it definition.

What if I replace some of the magenta with a deep magenta?

I'm not sure this is an improvement. I like the deep magenta but I think the large  magenta "jewel" is too overwhelming, too heavy.

What if I take out some of the magenta and put the tan back in?

I like the ribbon effect of this. And it is lighter. It is almost as if the magenta ribbon has been placed on top of the Card Trick blocks. 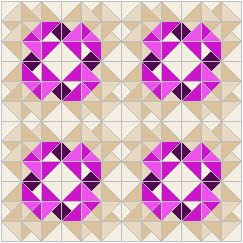 When I combine 4 of these large blocks there is a diamond pattern that shows up between the Card Trick blocks. I like it.